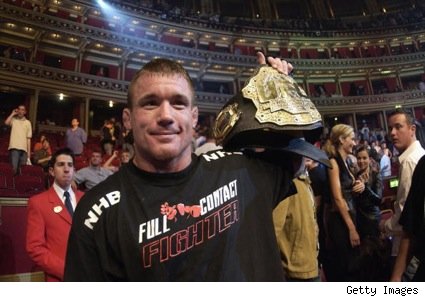 Less than two weeks before UFC 90, Josh Koscheck was informed that Diego Sanchez had suffered an injury, and he was offered the opportunity to fight Thiago Alves. He jumped at the opportunity, and Koscheck vs. Alves is now the co-main event.

And while the way Alves dismantled Matt Hughes at UFC 85 might make some fighters hesitant to take Alves on, Koscheck says that in reality, Hughes' problem was that he had a terrible game plan, and Koscheck will show the right way to fight a striker with Alves' power.

"I don't know what Matt was doing in that fight," Koscheck said today. "That was probably the worst strategy in UFC history in my opinion."

Alves failed to make weight for the Hughes fight, but both Koscheck and Alves told me that they'll have no trouble making weight. Koscheck was already planning to fight Yoshiyuki Yoshida in December, and he says that because of that he was in the gym training hard. Koscheck said he'll weigh in at 170 at the weigh in during the afternoon of October 24 and then go up to 187 by the time he steps into the Octagon at night on October 25. Alves said he'll gain even more weight after the weigh in, planning to weigh 195 when the fight starts.