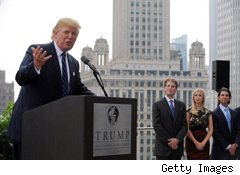 Donald Trump will announce a new reality show Thursday, and instead of saying "You're fired" to the losers, he'll say "You're fighting Fedor" to the winner.

Trump is one of the front men for the new show Fighting Fedor, a reality show that has been in the discussion phase for about year but is now, supposedly, finally coming to fruition. The show will feature a group of heavyweight mixed martial arts fighters who will compete for the right to fight the best heavyweight in the world, Fedor Emelianenko.

There's no word yet on when the show will start taping, when it will air, or what channel it will be on. Those issues aside, the show itself could be interesting. But the problem is that no one who would appear on a show like this would have any chance of beating Fedor.

The show will be produced by M-1 Global and Affliction, and the two organizations and Fedor will also announce on Thursday that they've entered into a long-term contract extension. MMA fans will hope that the long-term arrangement involves Fedor fighting top-notch heavyweights, and not reality show contestants.