Dana White: Ultimate Fighter's Junie Browning Is Not the Next Anderson Silva 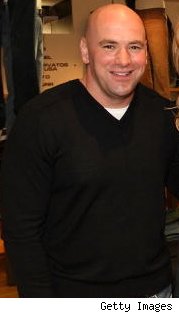 UFC President Dana White created a stir in the MMA world before the current season of The Ultimate Fighter began airing by saying that there was a lightweight on the show who was so talented that he could be "the next Anderson Silva."

So who is that fighter? Some have speculated that it's Junie Browning, who acted like a jackass in the Ultimate Fighter house but, surprisingly, was not kicked off the show. Did White keep him around because he's the next Anderson Silva?

No. In an interview on The Carmichael Dave Show, White said of Browning, "He's not the most talented guy on the show. Everybody thought I was talking about Junie."

White also defended the practice of supplying the Ultimate Fighter house with alcohol, noting that if a fighter has a drinking problem, he'd rather find that out before offering him a contract. He certainly learned that about Junie.