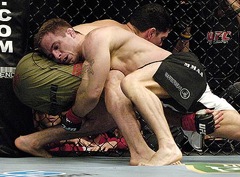 As great as the January fight between UFC lightweight champ B.J. Penn and UFC welterweight champ Georges St. Pierre is going to be, I don't much like what it does to the lightweight division.

There are several guys I'd like to see get a shot at Penn's belt, but because Penn has had a long layoff since his last title defense and will now move up to welterweight for at least one fight, we might go more than a year between UFC lightweight title fights.

But there is one piece of good news: By the time Penn moves back down to lightweight to defend his belt, we should have a pretty good idea who the No. 1 contender is.

One fight that will go a long way toward determining the No. 1 contender is Tyson Griffin vs. Sean Sherk at UFC 90. Griffin is 12-1 and on a four-fight winning streak, while Sherk is the former champ who lost to Penn at UFC 84. I don't think Sherk is going to get another shot at the title any time soon, but he can serve as a gatekeeper in the division, and I do think Griffin can make a strong case that he deserves a title shot if he beats Sherk.

Except that it's hard to see Griffin getting a title shot before Frankie Edgar, since Edgar beat Griffin last year. Edgar is supposed to fight Matt Wiman at the "Fight for the Troops" event on December 10, and if Edgar wins that, he'll have a pretty good case that he deserves a title shot, too.

And then there's the Kenny Florian-Joe Stevenson fight at UFC 91. The winner of that one can make a pretty good case that he deserves the next title shot.

So where do we go with all this? I'm not sure. I know that Griffin vs. Sherk is the start of a good run of UFC lightweight fights. I just wish we didn't have to wait a year between title fights.