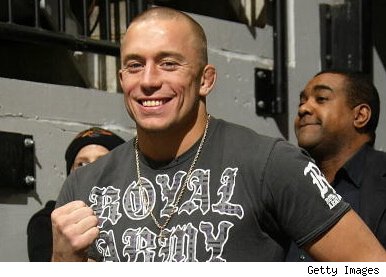 One of the reasons that I think Georges St. Pierre has a chance to be considered the best fighter in mixed martial arts history some day is that he never stops adding new weapons to his arsenal.

"This was the high point in my career," St.-Pierre said of getting the BJJ black belt, per GracieMag.com. "When I received my black belt in karate, when I conquered the UFC belt, and today."

In my view, the combination of his stand-up, wrestling and jiu jitsu makes St. Pierre one of the half dozen or so most well-rounded fighters in the sport, along with Anderson Silva, Fedor Emelianenko, B.J. Penn, Urijah Faber and Miguel Torres.

Just for kicks, after the jump, watch a video of GSP using an arm bar to beat Justin Bruckmann in his second professional fight in 2002.