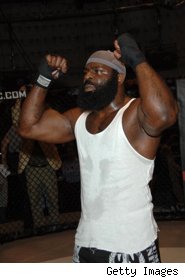 On Friday I interviewed EliteXC head of fight operations Jeremy Lappen, and pointed out to him that he had seemed to contradict himself about whether or not EliteXC offered Seth Petruzelli a submission bonus.

Today the writer of the Sports Illustrated piece in question, Josh Gross, told me flatly, "I stand by my reporting. I did not misquote Jeremy Lappen." Indeed, Gross played for me a portion of his recorded interview with Lappen, in which Lappen says to him that Petruzelli was given "Just a knockout bonus. We don't give submission bonuses."