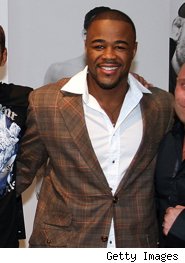 Thanks to his knockout of Chuck Liddell last month, Rashad Evans is now the No. 1 light heavyweight contender in the UFC, and one of the organization's up-and-coming stars.

But I was reminded today while watching a DVD of The Ultimate Fighter Season 2 that Evans hasn't always been viewed quite so favorably.

Evans' first fight on The Ultimate Fighter was a lackluster decision victory over Tom Murphy in which he landed a couple of strikes but mostly just stood back and did nothing, knowing that Murphy had a bad knee and wasn't going to be able to inflict much damage of his own.

After the fight, UFC President Dana White described it as "the absolute sh--tiest fight I've ever seen in my whole life."

After that, Matt Hughes, who was working as one of the coaches on that season of The Ultimate Fighter, proceeded to berate Evans for showboating and tell him that he had embarrassed himself, his opponent and the sport.

Of course, as it turned out, Rashad did win the thing, and he's now one of the UFC's top fighters. How many people would have expected that after his first showing on The Ultimate Fighter?