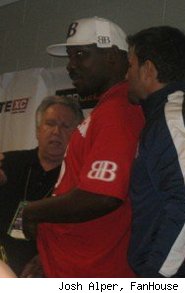 EliteXC has added a fight featuring the undefeated heavyweight Brett Rogers to its November 8 card in Reno, the promotion confirmed today.

EliteXC head of fight operations Jeremy Lappen told me that Rogers will fight on the card, which is EliteXC's last of 2008. He declined to say who Rogers' opponent will be, but he said an official announcement will be made next week, and he said it will be "an interesting name."

Rogers is best known to casual fans for having a war of words with Kimbo Slice, although the reason that war of words hasn't yet become a fight in the cage is that Rogers is a much better fighter than Kimbo and EliteXC was trying to keep Kimbo from losing. (Whoops.)

The November 8 EliteXC card is shaping up as a very good one even though, Lappen said, the rumored Yves Edwards vs. Fabricio Camoes fight is not going to happen.

These five fights are currently scheduled to air live on Showtime:

There is, however, some bad news: It appears that the card has grown too crowded for the Kaitlin Young-Sarah Kaufman fight to make it on the air, so fans of women's MMA will probably have to buy a ticket if they want to see anything more than highlights.

"We're trying to see if Showtime will carry six fights but there probably won't be time," Lappen told me. "Our female division is growing and that's going to be a great fight."