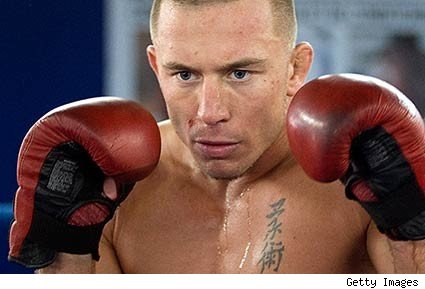 I've yet to hear from anyone who actually thinks that Patrick Cote will beat UFC middleweight champion Anderson Silva at UFC 90. But here's one person who thinks Cote can beat Silva: UFC welterweight champion Georges St. Pierre.

On his Yardbarker blog, St. Pierre, who is a friend and training partner of Cote's, writes about how Cote is looking, just over two weeks out from the fight, and why he thinks his buddy has a real chance of pulling a shocking upset.

It's very important for me to help my friends and training partners when they need it because they were there for me when I prepare for my fights. When I came back to Montreal, I kept training with Patrick Cote & Denis Kang, who are both fighting on October 25th. Kang is fighting in Calgary, and Patrick Cote is fighting Anderson Silva for the UFC World Middleweight Championship. Patrick looks better than I have ever seen -- even though the odds are not in his favor, I would not be surprised to see him shock the world. It would be great to have world champions in Quebec!

If Cote beats Silva, there will be two French Canadian UFC champions and only one Brazilian (interim) UFC champion. But St. Pierre's blog post comes across as something he feels like he has to write because Cote is his friend, not like something he actually believes. Deep down, I think St. Pierre believes Silva will destroy Cote.