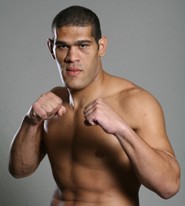 Antonio Silva will have his appeal hearing with the California State Athletic Commission on October 22.

Says EliteXC boss Jared Shaw of Seth Petruzelli, "Seth is under a long-term contract. We'll talk to him about what the future brings. Seth Petruzelli has got some big fights under his belt, I'll tell you that much."

Brandon Vera says he's finally treating his career in the UFC like a business, not a hobby.

Did the folks at Affliction get their money's worth from Andrei Arlovski?

Neil Wain tells UFC.com, "I know I'm very lucky to have a UFC contract. I've only had five fights. If I'm honest – and I'm an honest sort of guy – I'd say I haven't fought at this calibre. I've never fought anybody at this level and I've never fought on a show that's even remotely close to the kind of extravaganzas the UFC put on."

Here's a look at the winners and losers from EliteXC: Heat.