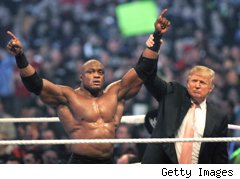 Bobby Lashley, the former amateur wrestler who became a star in the WWE, says he's serious about taking up mixed martial arts. He also says he has a contract signed and will be making his fighting debut soon.

But as for the little issues like where, when, against whom, and for what promotion he'll be fighting? Yeah, he has no idea.

Lashley spoke to Ariel Helwani of MMARated.com, and he said he's signed with the American Fight League, but "they're still getting everything together."

Lashley added, "We're working on a contract right now. I think we're going to fight in December. I think a contract will be signed this week. ... I don't know who my opponent is."

We're seeing a lot of this in mixed martial arts lately, with fighters saying they've got a fight scheduled but they have no idea where, when or against whom. And until you know those things, you don't really have a fight scheduled at all. So while Lashley might fight in MMA some day, and he might be a fairly big draw, I don't think anyone should count on seeing it any time soon.

You can watch the interview here or below.