Tito Ortiz Out Until at Least Summer 2009, Wants a Warm-Up Before Frank Shamrock 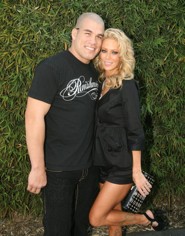 On Saturday night we noted that Tito Ortiz attended the EliteXC show and said he could sign with the organization within a week, with his sights set on a rematch against Frank Shamrock.

But anyone hoping to see a Tito vs. Shamrock match soon is going to be disappointed. In an interview with Ariel Helwani of MMARated.com before the EliteXC show, Ortiz gave more details about his future plans, and it's going to be a while before we see him in the cage again.

For starters, Ortiz referred to his upcoming back surgery as the same operation that Nate Quarry had. Ortiz said he expects to recover from the surgery in time to fight in mid-2009, but even that might be optimistic. Quarry fought in November of 2005, had the surgery in June of 2006 and didn't fight again until September of 2007. So Ortiz will be out until at least the summer of 2009.

And Ortiz added that he thinks he'd like to have "a warm-up fight" before he fights Shamrock. So we're probably talking about seeing Ortiz fight a nobody, and then not fight Shamrock until 2010.

That's assuming Ortiz does, in fact, sign with EliteXC -- and that EliteXC still exists by the time he's ready to go. Neither of those is a sure thing.

Ortiz said during the interview with Helwani, "I have all the money I want. I don't need any more money." I hope so, because it's going to be a while before he earns any more in the cage.

You can watch the video here or below.