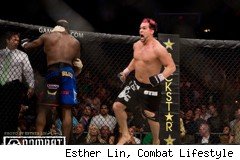 Seth Petruzelli knocked out Kimbo Slice in 14 seconds on Saturday night, but in one respect, Kimbo is getting the last laugh: He got paid 10 times as much money as Petruzelli.

The official payroll reported to the Florida State Boxing Commission shows that EliteXC paid Kimbo $500,000 to fight Petruzelli, who made only $50,000 for his efforts. Petruzelli's base pay was $35,000, and he got an extra $15,000 as a bonus for winning. If Kimbo had won, he would have received an additional bonus of $100,000.

Obviously, what this means is that if you're a professional fighter, you're paid primarily for the number of people you can get to watch your fights, not for your performance in the cage. And since most of the people were watching that fight because of Kimbo, that means Kimbo gets most of the money.

Andrei Arlovski also made $500,000 for his win over Roy Nelson (who made $80,000), although he was paid by Affliction, not EliteXC. Arlovski and Kimbo were the only fighters on the card who made six figures; the next highest-paid fighter was Jake Shields, at $50,000.

Biggest surprise: Gina Carano only made $25,000. One thing to keep in mind, though, is that the most famous fighters also make a lot of outside income from endorsements. Carano is definitely making more money outside the cage than she is in it.