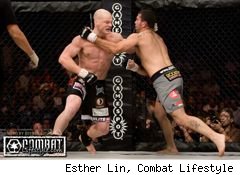 Although Kimbo Slice showed on Saturday night that he has no business in a mixed martial arts cage, I hope that doesn't mean the end of EliteXC on CBS. The four televised undercard fights demonstrated that MMA does belong on network television.

Benji Radach came out swinging against Murilo "Ninja" Rua and earned a TKO halfway through the second round. Radach has been around a while, but that was the best win of his career. I loved the way he controlled the tempo.

Gina Carano showed, indisputably, that she's a real fighter with a dominant unanimous decision over Kelly Kobold. If EliteXC has another show on CBS, I hope Carano vs. Cris Cyborg is the main event.

Andrei Arlovski didn't dominate Roy Nelson the way I thought he would, and their fight might have had a different outcome if the ref hadn't made the bizarre decision to stand them up when Nelson had side control. But I still love Arlovski's punching power, and I love the fact that Fedor Emelianenko's likely next opponent was exposed to a national television audience.

Jake Shields won his 11th straight fight, and although he didn't do so in the dominant fashion he's accustomed to, he took on a powerful striker in Paul Daley and emerged with the submission win he wanted.

So yes, EliteXC and CBS overhyped Kimbo, but they also gave us four good fights before the bust of a main event. For that, they deserve our thanks.