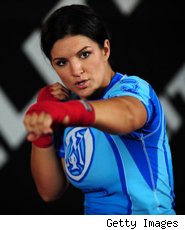 Anyone who thought the fate of EliteXC on network television was tied to the fortunes of Kimbo Slice is "100 percent misinformed," a CBS executive told me today.

CBS Senior Executive VP for Primetime Kelly Kahl said that despite the dramatic knockout of Kimbo at the hands of Seth Petruzelli, the network has every intention of putting mixed martial arts on its airwaves again.

"We have a four-fight contract," Kahl said. "We certainly plan on coming back with fight No. 4."

I asked Kahl for his immediate reaction when he saw Kimbo go down.

"I think we all said, 'Holy,'" Kahl said, "and then you could insert a four-letter word."

But Kahl added, "It might not be the end everybody wanted, but that points out that the sport is unpredictable."

Kahl said the ratings -- which were similar to the ratings the last time Kimbo fought -- are impressive when you consider that sports fans had a lot of other options.

"The numbers last night were terrific," Kahl said. "The total viewer number was on par with May 31 and the demos were down just a little bit, but we were up against a couple good college football games and the baseball playoffs. ... Last night was a step ahead, not a step back. To do roughly the numbers we did in May against much steeper competition bodes pretty well."

When I told Kahl that some commentators suggested before last night's show that EliteXC could go off the air on CBS -- and maybe out of business altogether -- if Kimbo lost, he scoffed.

"That is 100 percent misinformed," Kahl said, "written by a lot of people who have very little inside knowledge into what's going on even though they might think they do."

Overall, Kahl said, CBS is proud to have broadcast the performances of Benji Radach, Jake Shields, Andrei Arlovski and Gina Carano. And the network's dedication to mixed martial arts on network television remains very much alive: "We're trying to put on good fights for free."