Tito Ortiz Could Sign With EliteXC Soon, Fight With Frank Shamrock Next? 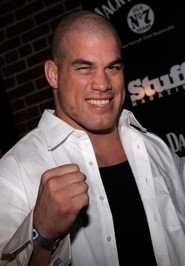 Tito Ortiz, the former UFC light heavyweight champion who is the most famous free agent in mixed martial arts, attended Saturday night's EliteXC show in South Florida, and he suggested that he's close to signing a contract with the organization.

Ortiz referred to himself as "about a week away" from fighting in EliteXC, and he even mentioned a possible first opponent in the organization: Frank Shamrock, who just happened to be on hand as one of tonight's CBS announcers.

Of course, Ortiz has claimed that he was close to signing a contract before, and, really, until a contract is signed it doesn't mean much.

There's also the little matter of Ortiz needing back surgery. So it could be quite some time before we actually see Ortiz in the cage again. But as of right now, it appears that the most likely scenario is that Ortiz will fight for EliteXC some time next year.