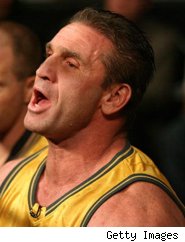 EliteXC has suffered a major blow just hours before its prime time CBS show tonight, as Ken Shamrock has suffered an injury and has pulled out of the main event fight with Kimbo Slice.

It is not clear what the nature of the injury is, or where or when Shamrock suffered it. It's also not clear whether Kimbo can sill fight tonight. MMA Junkie reports that EliteXC officials are scrambling to find a last-second replacement to fill in for Shamrock against Kimbo, but it would be very difficult to get the athletic commission in Florida to approve the fight on such short notice.

MMA Rated reports that Kimbo might be fighting Seth Petruzelli instead of Shamrock; Petruzelli was supposed to fight on the undercard, and his undercard fight did not go off as scheduled.