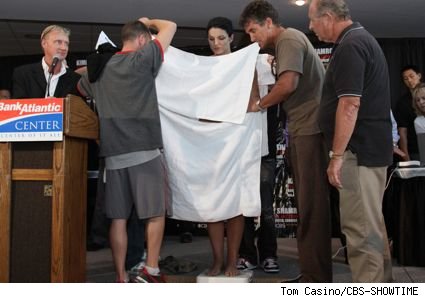 We mentioned yesterday that Gina Carano had to go nude to make weight for tonight's fight against Kelly Kobold on EliteXC: Heat, and now we have the visual evidence.

It's not extremely unusual for a fighter to have to take off all of his or her clothes and be shielded from the crowd with towels to make weight; I've seen it several times with boxers, including Oscar De La Hoya. But it is particularly noteworthy with Carano, because she missed weight for her last fight and has vowed in recent weeks that it wouldn't happen again this time.

A video of Carano's weigh-in is below.