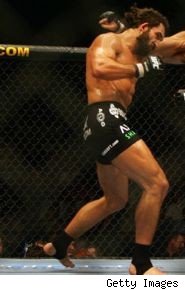 The fight went to the ground early, with the 260-pound Nelson on top and getting control but not doing a lot of damage, before the ref stood them up halfway through the round. Nelson then pushed Arlovski against the cage and held him there, while Arlovski tried to land a couple of punches and knees. It was a close first round in which neither fighter was a clear winner.

But in the second round, Arlovski showed that he's clearly the superior fighter, landing a series of knees and strikes before finally knocking Nelson out with a big right hand at the 3:14 mark.

The fight was part of a co-promotion between EliteXC and Affliction. There has been talk that Affliction would like Arlovski to fight Fedor Emelianenko, who is widely regarded as the best heavyweight in the world, in January, and if that fight goes off it will be a big one. Fedor has been featured in multiple commercials during tonight's CBS show, and Arlovski did a nice job of promoting himself with a solid performance.

Arlovski is now on a five-fight winning streak and has improved his professional MMA record to 14-5. Nelson falls to 13-3.