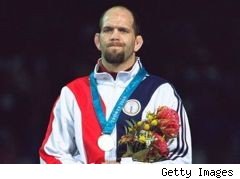 Matt Lindland is, in addition to being a very good professional mixed martial arts fighter, a former amateur wrestler who represented his country in the Olympic Games, and a politician who is running for the state legislature in Oregon.

But if you'd think that experience would make Lindland diplomatic, well, you'd be wrong. When asked to assess Saturday night's EliteXC Kimbo Slice vs. Ken Shamrock fight on today's edition of Inside MMA, Lindland let loose on both fighters.

"First impression is, 'Who cares?'" Lindland said during a segment when fighters and others in the MMA world were asked who they thought would win. "This is a match-up of a no-talent bum and a guy that's way past his prime. Ken Shamrock was a very good fighter in his day. He's 46 years old, he's tired, he's worn out, he's looking for a payday and you've got a guy that's a no-talent bum out there fighting him that everybody's built up into this myth. And somebody needs to dispel the myth."

Lindland never did offer a prediction for who he thought would win the fight, but while his answer oozed contempt for both fighters, it oozed more contempt for Kimbo than it did for Ken, so I'd take that as a lukewarm endorsement for Shamrock.

There's been talk that Lindland, who last fought on the Affliction: Banned card, might fight Jake Shields in an EliteXC-Affliction co-promotion. I wonder how the EliteXC folks will feel about that when they hear the way he denigrated their prime time network television main event.