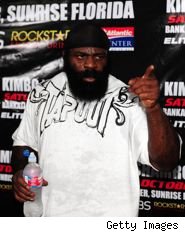 It's the fight card that could determine the future of EliteXC and maybe even the future of mixed martial arts on network television. EliteXC: Heat is just a day away, and although the main event is Kimbo Slice trying to knock out a washed-up legend, I'll be tuning in more for the four undercard matches. Here are the details:

How: Watch for free on CBS

Gina Carano vs. Kelly Kobold
Carano is by far the most famous women's MMA fighter in America, but is she the best? I think she'll get a fairly tough test from Kobold, but ultimately I think Carano has too much power with her feet and knees for Kobold to handle. Prediction: Carano by TKO.

Andrei Arlovski vs. Roy Nelson
Arlovski is one of the Top 5 heavyweights in the world and is the likely next opponent for top heavyweight Fedor Emelianenko. Nelson is a big fat guy who has some MMA skills but doesn't feel like getting in shape. This fight is a mismatch. Prediction: Arlovski by KO.

Jake Shields vs. Paul Daley
Shields is the EliteXC welterweight champion and by far the best welterweight in the world outside the UFC. Daley has good punching power, but Shields won't let Daley lay a glove on him. Prediction: Sheilds by submission.

Murilo "Ninja" Rua vs. Benji Radach
If there's going to be an upset on this card, this is the fight most likely to produce it, especially if Radach pretends Rua is robbing a restaurant. But I think Ninja -- whose younger brother Mauricio "Shogun" Rua is one of the best light heavyweights in the world -- has too good a jiu jitsu game for Radach. Prediction: Rua by submission.