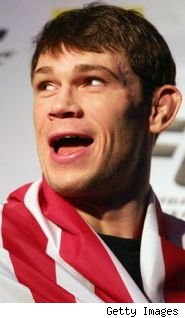 UFC 92 is shaping up as the most complete mixed martial arts card of the year, with three fights worthy of being main events.

Although the two title fights are the co-main events, from the MMA fans I talk to, Rampage vs. Wanderlei might actually be the biggest draw of the three. The two fought twice in Pride, with Silva winning both, and fans have long clamored for a third fight.

Overall, this is a tremendous card, and it's one that not only brings 2008 to a great close but also helps set the tone for 2009: The Mir-Nogueira winner will fight the Brock Lesnar-Randy Couture winner for the heavyweight title sometime next year, and there's a pretty good chance that the Griffin-Evans winner will fight the Rampage-Silva winner for the light heavyweight title sometime next year. There are a whole lot of great fights on the horizon for UFC.