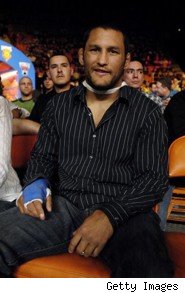 The UFC's international expansion continues with the announcement that UFC 93 will take place at the O2 Arena in Dublin, Ireland on January 17. Dan Henderson will fight Rich Franklin in the main event.

The co-main event is a rematch of Mauricio "Shogun" Rua and Mark Coleman, pitting two guys who were once among the sport's biggest stars but who are coming back from injuries and long layoffs.

Henderson-Franklin is a good fight between two popular, well-respected fighters, both of whom have moved between middleweight and light heavyweight. This fight will be at 205 pounds, as will Rua vs. Coleman.

Shogun was once considered by many to be the best light heavyweight in the world, but he suffered a serious knee injury in training and hasn't fought since losing to Forrest Griffin at UFC 76 on September 22, 2007. Coleman is one of the all-time greats in mixed martial arts, but he's been off even longer: His last fight was against Fedor Emelianenko on October 21, 2006.

Coleman beat Rua by breaking his arm in 2006, when they were both fighting in Japan for the now-defunct Pride. Plenty of fans will be looking forward to this rematch, although neither Coleman nor Rua is likely to be as good a fighter in 2009 as they were in 2006.

UFC 93 will be broadcast on pay-per-view in the United States, with customers having the option of either watching it live at 3 p.m. Eastern or on tape delay at 10 p.m. Eastern.

The UFC's pre-Super Bowl show, which is expected to feature Georges St. Pierre vs. B.J. Penn, had been referred to among fans as UFC 93, but in reality it appears that that show will be UFC 94.