Gina Carano Won't Say How Much She Weighs; Every Other MMA Fighter Does 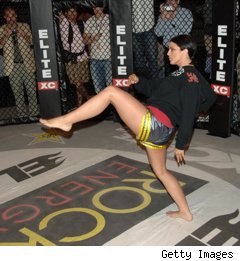 In my time covering mixed martial arts, I've probably asked a couple dozen fighters how much they weigh. It's a question I ask fairly often because it provides a yardstick for where fighters are in their preparation for their next fight.

The first fighter who ever refused to answer was Gina Carano, whom I asked last week. Here's the audio (via Steve Cofield) of me asking Carano how much she weighs, and of Carano refusing to answer:

Notice that Carano's opponent, Kelly Kobold, volunteered her weight (160 pounds) without me asking her. Kobold knows that it's a completely legitimate issue, as has every other fighter I've ever asked.

So why won't Carano answer? I don't know, but I sure hope she's telling the truth when she says she's going to make weight on Friday for her fight on Saturday. If she misses weight again this week, it will call into question whether she's ever going to take her sport seriously.