Michael Bisping: UFC Does Everything Right 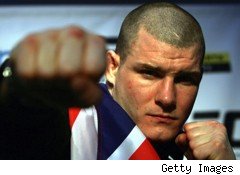 Michael Bisping has gone from being a member of the house in The Ultimate Fighter 3 to being the face of mixed martial arts in England. Not a bad journey.

Bisping has now had seven fights in the Octagon, and as he prepares for his eighth, against Chris Leben in the main event at UFC 89 on October 18, Bisping said he has absolutely no complaints about his employer.

From a Q&A in The Telegraph:

Q: Is there one single change, rule change, or anything you'd like to see altered about the UFC, or in mixed martial arts?

A: I think on the whole I'm very happy with it. The only aspect I feel could be scrutinized more is that different judges seem to look for different things. I'd like a more uniform set of guidelines for the judges. I think it would make it less of a grey area for the fighters when there is a close decision. Yet having said that, a decision in MMA is always down to a viewpoint from a judge, so perhaps it is impossible to pigeon-hole the process. On the whole though, UFC are doing everything right.

Bisping also talks about the possibility that he'll be an Ultimate Fighter coach, that he'll square off with Dan Henderson, and that he might someday get a title shot against Anderson Silva. The whole interview is worth a read.