Duane Ludwig on Cutting Weight for MMA: 'Train the Body to Piss Regularly' 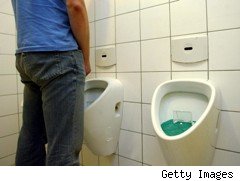 When you talk to an average person who isn't into boxing, wrestling or mixed martial arts, they're amazed at how much weight a competitor can cut prior to a weigh-in.

It sounds crazy that the average person will spend all year on the treadmill to try to fulfill the New Year's resolution of losing 15 pounds, and then you'll hear about a fighter who lost 15 pounds in a couple of days to make weight for a fight. But it happens.

Of course, that's all water weight. And in talking today to the MMA fighter Duane Ludwig (who fights Sam Morgan on Friday night's Strikeforce card), I learned one technique of a man who says he can easily cut 10% of his body weight in 24 hours.

"I'm not giving away all my secrets," Ludwig said if the way he cuts weight. "But water loading is big. I drink about a gallon of water a day, and train the body to piss regularly. Then once the weigh-in is coming up, I stop drinking water -- but my body is still pissing. So all that water weight is gone."

Ludwig has to weigh-in at 165 pounds on Thursday, which means he has about 10 pounds to lose in the next 48 hours. He says that's no problem for him.