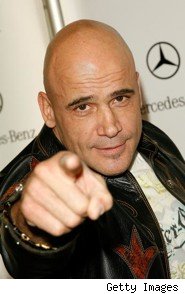 There's something so lovable about Bas Rutten. He was one of the best mixed martial arts fighters of the 1990s and who can instantly move between an intense stare and a mischievous grin.

At least, that's his persona on television. Is he like that in real life, too? I asked Duane Ludwig, the Strikeforce fighter who has trained with Rutten, what the real Bas is like.

"You ever seen a Jack Russell Terrier dog, how intense those things are?" Ludwig said. "He's the human version of that. He's so intense, and he goes and he goes and he's so energetic. He gets you in shape. He's an intense individual who knows the game, knows the right way to train every fighter, he recognizes that there isn't one style for everybody and will find the best style for you."

Right now, Rutten is best known to casual fans for training Kimbo Slice. And a Jack Russell Terrier personality might be just the right thing to whip Kimbo into shape.