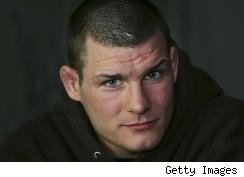 Jason MacDonald writes on his blog: "I signed a new contract with the UFC this week. It's a new four-fight deal. ... My gut feeling is I'm going to fight Michael Bisping, win or lose in his upcoming bout."

UFC heavyweight Shane Carwin has a side job as an assistant wrestling coach at the University of Northern Colorado.

Roan Carneiro is unsure about his future with the UFC.

A look at the financial struggles of upstart MMA organizations.

Here's the view from the cheap seats at Dream.6.

Can EliteXC and CBS really fit five fights into two hours? Some people don't buy it.