In 1997, Royce Gracie Challenged Mike Tyson and the New York Times Covered It 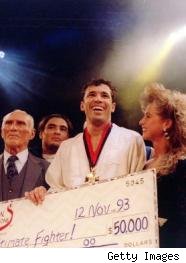 Doing some research into the early days of mixed martial arts, I came across this 1997 New York Times article in which Royce Gracie, the first UFC champion, challenged Mike Tyson to "a no-holds-barred scrap, anytime, anywhere."

The article does contain the obligatory "human cockfighting" reference, but it's amazing to me that the New York Times was giving any recognition at all to mixed martial arts at the time -- let alone recognition that Gracie was "a skilled jujitsu fighter, and though he no longer competes in the U.F.C., he's one of the most famous competitive martial artists in the world."

Obviously, Tyson, who at the time was commanding about $20 million a fight, wasn't about to take a fight with Gracie, and the whole thing was just an attempt to drum up some publicity. But the fact is, it was just the kind of PR gimmick the UFC needed if it wanted the Times' attention: According to a search of the Times' archives, the words "Ultimate Fighting Championship" wouldn't appear in the paper again for four years.