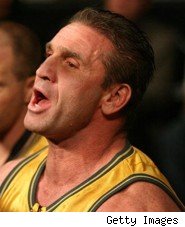 We're a week away from the Ken Shamrock-Kimbo Slice EliteXC fight on CBS, and the general consensus is that Kimbo just needs to stay on his feet and pound Shamrock until he knocks him out -- as each of Shamrock's last five opponents have done in the first round.

But I was a little surprised to read this quote from Shamrock's trainer:

"He's gotten in great shape in a short amount of time. If he's standing up (against Kimbo Slice) he'll dominate."

Obviously, as Shamrock's trainer he's going to speak highly of his own fighter and disparage his opponent, but until now all the quotes I'd heard out of the Shamrock camp have indicated that Shamrock wants to fight on the ground. Might Shamrock actually stand and trade blows with Kimbo?

If he does, I think he's in for his sixth straight first-round knockout.