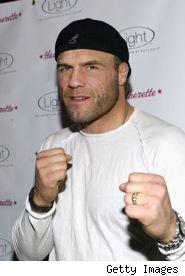 Gina Carano, the most famous female mixed martial arts fighter, is making the rounds to promote her fight against Kelly Kobold on CBS on October 4. And in a conference call yesterday, she made an interesting comment about her training.

Carano, who trains at Xtreme Couture, the gym owned by UFC heavyweight champion Randy Couture, said she is sparring with Couture's son as she gets ready to fight Kobold. I haven't been able to get any information on Couture's son -- age? weight? MMA experience? -- but Carano said he's a challenging sparring partner who doesn't go easy on her.

Some people would probably object to a man and a woman in the cage together, but I've spoken to female fighters in the past who mention that they have trouble finding sparring partners, so I think it makes a lot of sense, assuming they're of close enough sizes and skill levels that it benefits both of them. And Randy's son isn't the first Couture Carano has sparred with.