Gina Carano Promises She'll Weigh 140, Sick and Tired of Questions About Her Weight 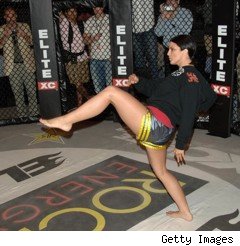 The last time Gina Carano fought for EliteXC, she showed up to the weigh-in at 144.5 pounds, four and a half over the limit.

The fight went on anyway and Carano won, but she has been dogged by questions about her dedication. And when I asked her today about her weight, it was clear that she's sick of the question.

"I'm going to weigh 140 pounds next Friday," Carano told me when I asked how much weight she still had to cut. "How much I weigh right now I'd rather keep to myself because I don't want to answer any more questions about it."

Carano said she has hired a nutritionist and added, "I've got really high expectations for this weigh-in."

As for her opponent for her October 4 fight, Kelly Kobold, she told me today that she weighs 160 pounds right now and that she'll have no trouble cutting 20 pounds in the next eight days.

Kobold acknowledged that the potential exists that Carano will miss weight again, but she said she'll fight no matter what. "The fight will go on -- I'm a fighter before anything else," Kobold said about the possibility that Carano will be overweight. "Is it fair or professional? Not really."