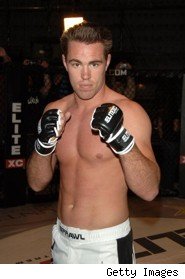 If you and I were to make a list of the top 10 welterweights in mixed martial arts, our lists probably wouldn't be identical, but both lists would almost certainly share these three qualities:

That means that as long as Shields is under contract with EliteXC, he can't fight any other Top 10 welterweights. And Shields acknowledged today that as long as that's the case, no one is ever going to consider him the No. 1 welterweight in the world.

"It's hard to be number one when you're not fighting the guys who are considered to be No. 1," Shields said.

Shields told me he knows that St. Pierre is widely viewed as the best welterweight in the world, and that he hopes he's able to fight St. Pierre eventually.

"I'll get a chance to fight GSP," Shields said. "I'm only 29. I'll be in MMA for five more years. One way or another if I'm winning, that fight is going to happen. ... I have no intention of leaving EliteXC, but at some point I do want to fight the best."

Shields wanted to make clear that despite his disappiontment at an inability to fight the top guys in UFC, he does believe that his opponent on October 4, Paul Daley, is a legitimate challenge, and the best guy EliteXC could have given him.

"As far as who they have, I think he's the top guy right now," Shields said. "I want to fight the best, but right now I've got Paul Daley in my way and I'm certainly not taking him lightly."

For his part, Daley told me that he doesn't buy into the various MMA rankings you can find around the web, most of which have Daley ranked anywhere from 20th to 30th.

"I don't really ever pay much attention to the rankings," Daley said. "Rankings don't mean nothing."

And what should we expect from the Shields-Daley fight?

"I don't think it's going the distance," Shields said. "Either I'm going to submit him or he's going to knock me out."