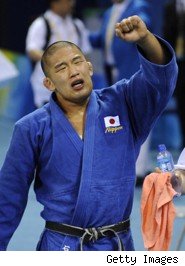 We still don't know whether Fedor Emelianenko's next fight will be for Dream on New Year's Eve in Japan, or for Affliction on January 17 some time in the first quarter of 2009 in Anaheim.

But to me, a more important question than the when and the where is the who. A quick look at some of the names that have been mentioned as a potential next opponent for Fedor:

Satoshi Ishii (pictured): After winning the gold medal in judo in the 220-pound and over weight class, Ishii challenged Fedor. And when Fedor addressed the crowd at Dream.6, the one potential opponent he mentioned by name was Ishii. But I don't think it's going to happen. Dave Meltzer reports that Japan's national judo federation is totally opposed to a Fedor-Ishii fight, and the 21-year-old Ishii wants to be the biggest star in judo for years to come. This is a fight that shouldn't happen and probably won't happen, at least not any time soon. But as for fights that could and should happen, there are four possible names...

Alistair Overeem or Mirko "Cro Cop" Filipovic: If Dream was in the business of giving MMA fans some great heavyweight fights, the best thing it could have done, with the guys it has under contract, was give us Overeem vs. Cro Cop, followed by the winner fighting Fedor. But since Overeem kept kneeing Cro Cop in the nuts, and since they're both in agreement about a rematch, I guess it won't work out. Which means Dream doesn't really have a good opponent for Fedor, so maybe we'll go to Affliction, which does ...

Andrei Arlovski or Josh Barnett: After Fedor, Arlovski and Barnett are the two best heavyweights outside UFC, and if Affliction would put Fedor in its oversized ring against either of them, that's a pay-per-view I would gladly buy. Unfortunately, Affliction doesn't even have a date set for its next show, and the indications I've heard are that Arlovski and Barnett are going to fight each other, as they had previously planned to do before Affliction canceled its October show. I agree with Zach Arnold, who says there's about an 80 percent chance that Fedor's next fight is New Year's Eve in Japan, and if it's not Overeem or Cro Cop, it'll probably be ...

A freak show: I'd love to see Fedor fight a top heavyweight, and I suppose it's possible that Dream could pleasantly surprise us and put Fedor in with a decent challenger like Sergei Kharitonov, but my best guess is that Fedor's next opponent will be an enormous man with limited MMA skills, like Hong Man Choi:

And I'll be watching, because I'd never turn down an opportunity to watch Fedor, which is why he can get away with fighting freaks. But please, Fedor: Don't fight Butterbean.