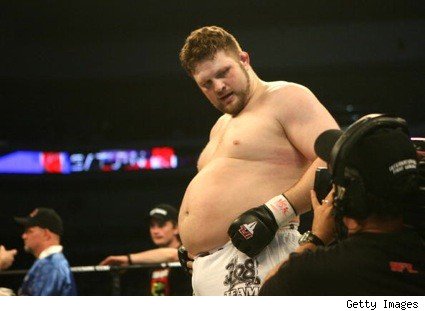 EliteXC has bolstered its October 4 CBS card with the addition of a solid heavyweight match-up between Andrei Arlovski and Roy Nelson.

The news -- first reported by Sherdog -- significantly improves the quality of the EliteXC show. Arlovski is widely viewed as one of the Top 5 heavyweights in mixed martial arts, and Nelson (pictured above) is considered to be in the Top 20. Although it's not as big a fight to casual fans, the quality of the MMA on display in this fight will be much better than the quality of the Kimbo Slice-Ken Shamrock main event.

The news is also a big surprise because both Arlovski, a former UFC champion with a 13-5 career record, and Nelson, who is 13-2 and former champion of the now-defunct IFL, are under contract to Affliction. But apparently EliteXC and Affliction think the only way they can ever compete with the UFC is to join forces, and they're willing to co-promote this fight.

For fans, EliteXC and Affliction working together has to be viewed as a good thing. The bottom line is that the October 4 EliteXC show just got better.