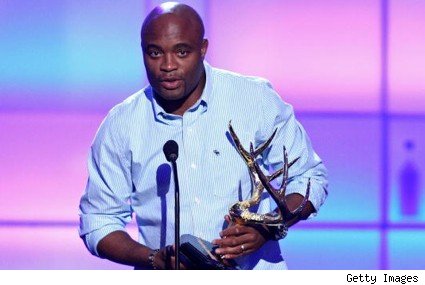 I wrote over the weekend that despite the retirement talk attributed to UFC middleweight champion Anderson Silva, I don't really think he's close to retiring. Now his manager, Ed Soares, has confirmed that Silva still has six more fights in the UFC.

Posting under the name ed sinister at mixedmartialarts.com, Soares writes:

Anderson's goal is to retire when he is 35. He still has 6 fights on his contract and he doesn't turn 35 for another 18 months. I know he will finish his 6 fights before he considers hanging up his gloves...
Ed Soares

So there you have it. UFC fans will be treated to at least six more Silva fights. After the jump, my thoughts on who those six fights should be against.

Gegard Mousasi: After watching him win the Dream.6 middleweight grand prix, I think Mousasi is a guy who ought to get a UFC contract and could at least give Silva an interesting fight, even though I think there's very little chance that he'd actually beat Silva.

Paulo Filho: The undefeated Brazilian is widely regarded as the second-best middleweight in the world. Unfortunately, they're buddies and have said they won't fight each other.

Chuck Liddell: Once Silva has the middleweight division cleared out, he ought to move to light heavyweight permanently, and a Liddell fight is the one that would do the most toward making him a star.

Wanderlei Silva: I've always thought that from a stylistic standpoint, Wanderlei Silva is probably the guy who would make the most exciting possible opponent for Anderson Silva.

Rampage Jackson: Assuming Rampage's head is in the game, he's the one person on this list I'd probably pick to beat Anderson Silva at 205 pounds.

Forrest Griffin: This assumes Griffin stays the champ for a while; if Silva wins a few high-profile light heavyweight fights, he'll get a title shot. I believe that Silva wants to win the light heavyweight title before he actually retires.