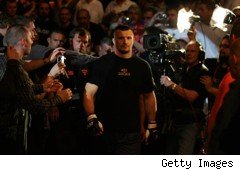 The highly anticipated heavyweight fight between Mirko "Cro Cop" Filipovic and Alistair Overeem at Dream.6 today had an extremely disappointing ending, as Overeem repeatedly kneed Cro Cop in the groin, preventing Cro Cop from going on and forcing the fight to end in a no contest.

Handling the TV commentary, Bas Rutten said that Cro Cop's corner had told him that "Cro Cop's right testicle is inside."

Overeem was dominating the fight early: He threw Cro Cop to the ground a minute into the first round, and in unleashing a ground-and-pound assault he opened up a cut over Cro Cop's left eye. They stood up briefly and Cro Cop threw a couple of his signature kicks, but Overeem caught one and took Cro Cop to the ground again.

But Overeem repeatedly landed knees to Cro Cop's groin in the clinch, and Cro Cop couldn't go on.

"I'm sorry this great fight had to end like this, in this way," Overeem said afterward. "It was a mistake. ... I wanted to finish Cro Cop with a KO or submission in a fair way."

Fedor Emelianenko was in attendance, and there was talk during the broadcast that Fedor could fight the winner on New Year's Eve in Japan. But with this unsatisfying ending, Overeem and Cro Cop should have a rematch.