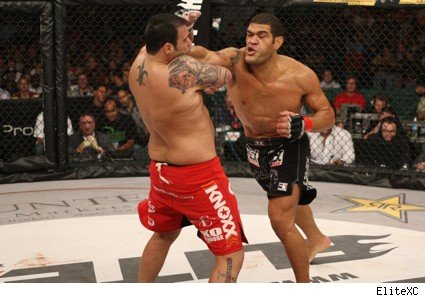 The California State Athletic Commission suspended EliteXC heavyweight champ Antonio Silva from mixed martial arts for one year after he tested positive for was boldenone, an anabolic steroid commonly used on racehorses, after his fight in July.

But Silva is appealing the ruling, and until he has exhausted his appeal, EliteXC considers him its heavyweight champion.

Lappen said, "Absolutely. Until proven otherwise, Antonio has told us that he didn't use performance-enhancing steroids and we support him. He's planning to fight the test and he thinks it was a false positive. We believe our athletes."

But while Lappen will supports his champion, appeals are rarely successful. My guess is that Silva will lose his appeal and that EliteXC will strip him of its title, rather than have a heavyweight champ who can't fight for a year.

And after that, look for Kimbo Slice vs. Brett Rogers to fight for the heavyweight title some time next year.