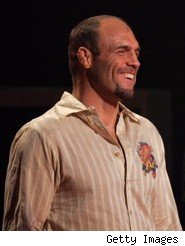 As UFC heavyweight champion Randy Couture gets ready for his November 15 fight against Brock Lesnar at UFC 91, I've been curious how, exactly, Couture would be getting ready.

Obviously, Couture knows how to prepare himself to step into the Octagon, but preparing for a guy like Lesnar -- the enormous former NCAA heavyweight champion turned WWE star -- presents some unique challenges. How do you find a sparring partner who can mimic the size and power of Lesnar, who has to cut weight to get down to the 265-pound heavyweight limit?

The answer, it turns out, is that Couture is sparring with another enormous fighter who was a very good college wrestling: Shane Carwin, who was an NCAA Division II wrestling champion and is now 9-0 in his professional mixed martial arts career. On this week's Inside MMA, it was reported that Carwin (who himself is preparing for a fight against Neil Wain at UFC 89) is serving as the sparring partner for Couture.

Lesnar is such a unique physical specimen that I'm not sure if anyone can truly replicate what he'll do in the Octagon, but Carwin probably comes the closest of anyone out there. It's a smart move for Couture.