Gina Carano Says She'll Make Weight for Next Fight: 'I've Made Corrections to My Diet' 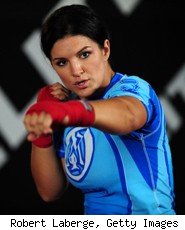 Carano commented on this week's episode of Inside MMA:

"I get in shape. I do what I have to do with whatever time I have. The last fight, I only had about three weeks to get in shape for that fight, but I wanted to stay in the MMA world, so I took it in three weeks and I fought. I've had a lot more time for this. I've made corrections to my game, I've made corrections to my diet and everything. I just hope for the best and learn from my mistakes. I'm doing the best I can."

When Carano says she only had three weeks to prepare for her last fight, she means she was busy taping American Gladiators up until three weeks before fighting Young. But whatever her scheduling issues, the bottom line is that she agreed to fight at 140 pounds and showed up at the weigh-in weighing 144.5. That's not acceptable.

As for the future of EliteXC, Carano said she remains cautiously optimistic about the promotion.

"Everybody knows that they've had financial problems," Carano said. "But I think they've got a good thing if they can just hold onto it."