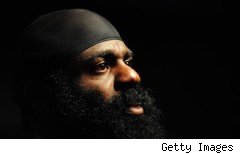 Harsh words for Kimbo Slice: "His punches have about as much technique behind them as Charles Barkley's golf swing. ... Watching Kimbo jockey for ground position is like watching an elephant try to pull its feet out of quick sand."

Another day, another sign that Showtime will buy Pro Elite.

The full match order of the Dream.6 card has been released.

Says UFC's Joe Lauzon, "It doesn't matter who they want me to fight. I'm not going to be the guy trying to pick his opponents."

Says Italian light heavyweight Ivan Serati of signing with UFC, "It has always been my dream to fight for the best promotion in the world and now it has become a reality. I feel very excited to bring my skills to the UFC. This means everything to me and everything to my country."

If you were looking forward to that MMA show at the fairgrounds in West Tennessee, you're going to be disappointed.

HDNet has struck a deal with CompuBox.