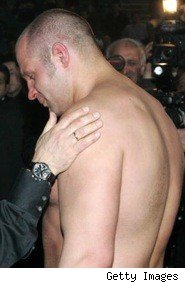 After Fedor Emelianenko destroyed Tim Sylvia at Affliction's first show, the indications were that he would next fight Andrei Arlovski. That was good news because Arlovski is universally recognized as a Top 10 heavyweight, and we all want to see Fedor fight top opposition.

But then we learned that Fedor had broken his hand on Sylvia's face, and Affliction said its second show would be headlined by Arlovski vs. Josh Barnett on October 11, with the winner likely to face Fedor in January.

But now that Affliction has canceled its October 11 show, the early indications are that Barnett vs. Arlovski will stay on the card, and they'll find a new opponent for Fedor.

That's a mistake. If Affliction is serious about the MMA business, it needs to give the fans Fedor against good opponents, and really, the only good opponents Affliction has under contract are Arlovski and Barnett. Affliction needs to pick one of them (I'd prefer Arlovski) and put them in its over-sized ring against Fedor.

Really, if it's not Arlovski or Barnett, who would Fedor fight next?

Look at the list of the top 25 heavyweights in the world, and tell me which one Affliction could put in the ring against Fedor and really expect to make for an interesting fight, other than Arlovski or Barnett. Among those in the top 25 who are under contract to Affliction,

Ben Rothwell? Who thinks he'd have a prayer against Fedor after he got knocked out by Arlovski? Pedro Rizzo? Ditto for him, after he was knocked out by Barnett. Aleksander Emelianenko? Well, yeah, I'd like to see that, but both brothers have said it will never happen.

The bottom line is that Barnett and Arlovski are the only guys Affliction has under contract who would pose any type of threat to Fedor. If Affliction puts them in the ring against each other and puts Fedor in against some second-tier heavyweight, they're missing a major opportunity.