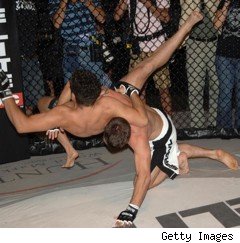 EliteXC announced today that it has stripped Noons of the lightweight title. EliteXC Head of Fight Operations Jeremy Lappen explains:

"We are stripping KJ of his championship belt for refusing to defend against Diaz. It's a very unfortunate situation but we cannot have belt-holders who refuse to fight the top contenders. We want champions who will fight anyone, anytime, anyplace. That's the mentality all champions should have.

"I feel very bad for KJ because I like him a lot on a personal level and have always thought he could be a big star.He's charismatic, has a very exciting fighting style and is a top level fighter. So I'm obviously disappointed that he has chosen to take this stance.

"I don't understand why he would turn down a chance to be a headliner on CBS on Oct. 4. KJ then turned down the fight again when we offered him a headlining spot on our next Showtime date against Nick."

I don't understand Noons' decision, either.

If Noons had agreed to fight Diaz on CBS, the network TV exposure would have made him one of the best-known mixed martial arts fighters in the country, and that would have opened all kinds of doors to him. Instead he'll toil in obscurity.

As for the now-vacant EliteXC lightweight title, Diaz will fight an opponent to be named later for it. I think the best-case scenario would be for Eddie Alvarez, last seen fighting in the Dream lightweight tournament in Japan, to compete for it. An Alvarez-Diaz fight would be exactly the kind of thrilling fight that EliteXC needs to book if it wants to stay in business.