Kimbo Slice: 'Anything Ken Shamrock Tries, I Am Prepared For' 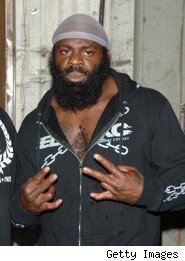 UFC heavyweight contender Frank Mir thinks Kimbo Slice is bad for mixed martial arts, but the basic reason I don't agree with that is that despite Kimbo's street fighting background, he's working hard at becoming a legitimate, well-rounded MMA fighter.

"I've worked on punches, takedowns, takedown defense, chokes, armbars, you name it," Kimbo said yesterday at an open workout to promote his October 4 fight with Ken Shamrock. "Anything that Shamrock tries on me, I am prepared for."

Although Kimbo talks about his street-fighting roots while he promotes his fights, he's also taking seriously the training he's getting from his coaches, Bas Rutten and Randy Khatami.

"Bas has done everything he can to help me. Bas and Randy (Khatami) have made me a complete and well rounded fighter," Kimbo said. "My camp has pushed me harder than ever before. I have the endurance and I am prepared to go the distance. I doubt this fight will go the distance, but if it does, I'm ready. ... I'm like a sponge. I pick up something from everyone I work with. If something doesn't work in the cage I will switch it up to something that does. I'll do whatever it takes to win."

Is Kimbo ever going to be as good as Mir? No. But is he improving as a fighter and showing dedication to his sport? I think he is. And I don't think he's bad for the sport.

After the jump, see more quotes from Kimbo, and from Gina Carano, as distributed by EliteXC.

KIMBO SLICE:
"Once again, I'm fighting back in the crib. It feels like the backyard except, in EliteXC, we have a cage. "

"Nothing is going to stop me once that fight starts. I'll fight with a broken arm if the referee doesn't stop the fight. I will be unstoppable on Oct. 4."

"I question Ken's ground game. He's going to try and find a way to make me uneasy, but that's not going to happen. I'm never uptight. "

"Everyday I train it's a serious problem for all the heavyweight fighters out there. Everyday I get better and they should all be scared. "

"LaDainian Tomlinson was a good guy to work out with. That was a lot of fun. "

"EliteXC and CBS are a good thing for the sport. This is making the sport bigger and better. If it wasn't this big, think about what you and I would be doing. "

"Nothing really scares me, except for myself. At times, I find myself unpredictable. It's a mental struggle. A mental fight. "

"I love training with Bas and Randy. I know how to control my entire game right now."


GINA CARANO:
"I've got one of the toughest fights of my life coming up. I'm coming ready to fight. I'm going to give it my all. "

"I've handled the press and won't let it get to my head. I'm just living my life and doing my best."

"It's been unbelievable to be at the forefront of women's MMA. Raising the recognition of the sport has been a blessing. The fan support has been amazing. I'm standing up here because of the fans."

"There is something so pure and honest about two women fighting. The fans just love it."

"Randy and Kim, the whole Extreme Couture family, is tough. They expect the best from me and push me to my limits."

"My dad told me to stay in school because he wanted the best from me. But I think I've learned some of the best lessons in life from fighting. I don't have the college degree I was going for, but I have the experiences."

"America is a strange place to be when you are a star. I wish our culture would respect people as human beings and not as objects. When you're in the spotlight they love you, but that is very short lived."

"I'm a fighter. My job is to fight. "EliteXC is doing great things for the sport. I'm not trying to be a promoter. I just put on a good show and hope that people watch it."

"I am a recognized female in the sport, but I don't think that I am the face of women's MMA. It's just a label. I'm Gina Carano. You can label me that."

"I am a different person everyday. I may not look my best at a weigh in, but I'll be good the next day."

"Kelly (Kobold) is well rounded and she is coming to fight. I'm glad I'm going to be tested."

"My game plan is to fight a good fight. I've been studying her style, how she reacts under pressure and when she gets hit, but nothing compares to when you get in there and the fight starts."

"I'm a fighter first and foremost. American Gladiators was a good experience. I'm motivated by learning experiences, not by money or fame, so it opened my mind to a lot of things."

"Everyone has their own niche in life. I just seem to gravitate towards physical violence."