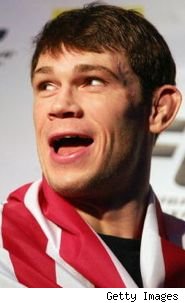 Everyone made weight for tonight's Ultimate Fight Night.

It's a must-win fight for Houston Alexander tonight against Eric Schafer.

Says Nate Diaz of his fight tonight against Josh Neer, "He's the toughest guy I've had to fight so far. I think he's underrated – I watched his fights and I think he's better than most of the guys in the division, so it's gonna be a tough fight."

Former Rampage Jackson trainer Juanito Ibarra gave SI.com his side of the story after allegations that he stole money from Jackson.

The petition to get the late Evan Tanner into the UFC Hall of Fame is closing in on 5,000 signatures.

The long-awaited third match between Rampage and Wanderlei Silva appears to be close.

Have EliteXC and Affliction worn out their welcome?

Says UFC welterweight champ Georges St. Pierre, "I am a fan of every kind of sport, but I really love ice hockey, basketball & chess."