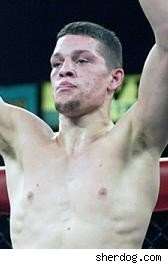 Diaz is now on a five-fight winning streak in the Octagon.

Said Diaz afterward, "Josh Neer, he ain't no black belt in jiu-jitsu like the other guys I've been fighting. This dude right here can fight."

Clay Guida raised his record to 24-6 by defeating Mac Danzig on the Fight Night undercard.

Says The Ultimate Fighter cast member John Polakowski, "It's a huge opportunity for me. I couldn't have asked for anything else. This is like a dream of a lifetime. So many people have this dream, but very few get to realize it."

UFC will counter-program EliteXC by showing UFC 86 on Spike while EliteXC has its third show on CBS.

Is Tito Ortiz about to sign with the American Fight League?

Welterweights Mike Swick and Jonathan Goulet have agreed to fight on the Ultimate Fighter finale on Dec. 13.

UFC is urging people to donate to the Fallen Heroes Fund.