Don King: 'UFC Is Taking 200 Years of Rules and Throwing Them Out the Window' 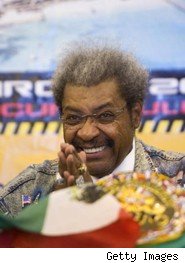 The boxing promoter Don King, who has done time for manslaughter and been accused of defrauding his fighters, isn't the guy I would choose to voice concern about the moral decline of our society.

But the writer Thomas Hauser, who regularly writes about his opposition to mixed martial arts, uses King as his go-to guy for why boxing is good and MMA is bad. Hauser quotes King at ESPN.com:

"UFC ain't nothing new," King said. "They started with 'ultimate' fighting, and then they civilized it and made it into boxing. All UFC is doing is taking 200 years of rules and throwing them out the window."

Personally, I can't take it seriously when I hear King giving lectures about being "civilized." But Hauser likes that quote so much that this is at least the second time he's used it; he also used it in this 2007 article.

King is free to say what he wants to say about the UFC, but is there anyone who doubts for a second that King would jump at the chance to promote an MMA fight if he thought he could make money on it? As for Hauser, as Zach Arnold writes, he's on a continuing crusade against MMA. If the best arguments he can make against the sport are recycled quotes from a guy like Don King, MMA must be in pretty good shape.