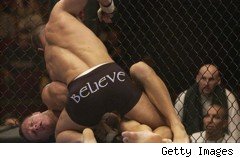 Evan Tanner, a former Ultimate Fighting Championship middleweight champion who was found dead in the California desert yesterday, and authorities do not yet know how he died.

The UFC's official web site reports that Tanner was found by an Imperial County Sheriff's Department Deputy after he had been reported missing by friends who said he hadn't answered their text messages since Wednesday. Tanner had written on his personal blog that there was no reason to be concerned about him:

"It seems some MMA websites have reported on the story, posting up that I might die out in the desert, or that it might be my greatest opponent yet, etc. Come on guys. It's really common down in southern California to go out to the off road recreation areas in the desert about an hour away from LA and San Diego. So my plan is to go out to the desert, do some camping, ride the motorcycle, and shoot some guns. Sounds like a lot of fun to me. A lot of people do it. This isn't a version of "Into the Wild". I'm not going out into the desert with a pair of shorts and a bowie knife, to try to live off the land. I'm going fully geared up, and I'm planning on having some fun."


UFC.com reports that Tanner's agent, John Hayner, described Tanner as "in a good state of mind the last time we spoke."