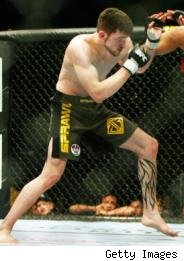 Another fight has been confirmed for the rapidly expanding UFC 91 undercard, as Sherdog is reporting that welterweight Dustin Hazelett will fight Tamdan McCrory.

Hazelett has a professional mixed martial arts record of 11-4, with eight of his wins coming by submission. His UFC record is 4-2. McCrory has a 9-1 overall record and is 2-1 in the UFC.

The undercard might also include Rampage Jackson taking on Wanderlei Silva. Adding that fight to the already stacked card would make UFC 91 the biggest event in the sport's history.