Next for Chuck Liddell: Anderson Silva? Fight a Tomato Can? Move to Heavyweight? Retire? 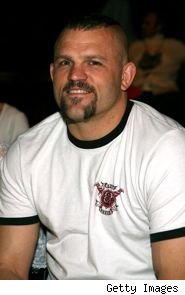 With one of the biggest punches in the history of mixed martial arts, Rashad Evans knocked out Chuck Liddell at UFC 88 last night, earning himself a shot at the light heavyweight title.

But what about Liddell, who held that title for two years and would have gotten another shot at it if he had beaten Evans? What is the future of The Iceman, who for years has been UFC's most popular fighter? Here are four possibilities:

Fight Anderson Silva: Silva is the middleweight champion and widely regarded as the best pound-for-pound fighter in the world. Assuming he successfully defends his middleweight title against Patrick Cote at UFC 90, Silva will have cleared out the middleweight division to such an extent that there really aren't any interesting fights left for him at 185 pounds.

Silva's manager has said that Silva would like to fight Liddell, and the fight would make big money for UFC. The only reason not to do it would be the fear that Silva would absolutely destroy Liddell. Which leads us to another option...

Fight a tomato can: The UFC might want to rehabilitate Liddell's image a little bit by setting him up for a quick knockout. The problem is that hard-core MMA fans will see right through that ploy -- just as we can see right through EliteXC giving Ken Shamrock to Kimbo Slice. And, of course, the bigger problem is that if Liddell were to lose, it would be devastating. That's why a better option would be ...

Move to heavyweight: Liddell is 38, and it's common for fighters to move up in weight class as they get older. Adding Liddell would do more to beef up UFC's heavyweight division, and it could set up a lucrative fourth fight with Randy Couture some day. Might Liddell fight Fabricio Werdum in his first heavyweight fight, with a stipulation that the winner gets first crack at the Brock Lesnar-Randy Couture/ Frank Mir-Antonio Rodrigo Nogueira winner?

I'd enjoy seeing Liddell give it a go at heavyweight, but there is one other option...

Retire: Liddell has now lost three of four fights since beating Tito Ortiz in the UFC's biggest main event ever in 2006. I'd like to see Liddell keep going, but after last night's knockout, it would be hard to blame him if he decides he doesn't want to set foot in the Octagon again.